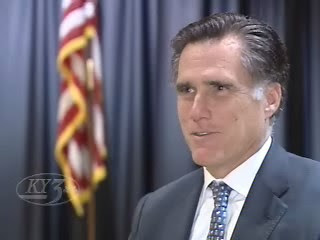 The former Superintendent of the Assemblies of God Church said he would have difficulty supporting Republican Mitt Romney for President because of his Mormon faith.

Rev. Thomas Trask also said he believes Mormons aren't Christians and considers them "a cult."
"It would be difficult yes . . . it would be very, very difficult," said Trask. "There are those who would rule him out as a potential candidate based upon his religious affiliation."
You can watch my special KY3 News @ 10 report on Romney's possible political trouble with Evangelical leaders in the Ozarks HERE. The special report delves into this mysterious faith and how it could shape voters perceptions of Romney right here in the conservative Ozarks.
In an extensive interview with KY3 News, Trask said Mormon beliefs are contradictory to those of evangelicals.
"The Bible teaches that a person becomes a Christian when they embrace the person of Jesus Christ as their Lord and Savior. The Mormon faith does not teach that," Trask said.
But local Mormons believe disqualifying Romney solely for his faith fuels myths and prejudice about the Church of Jesus Christ of Latter Day Saints.
Posted by David Catanese at 12:59 AM