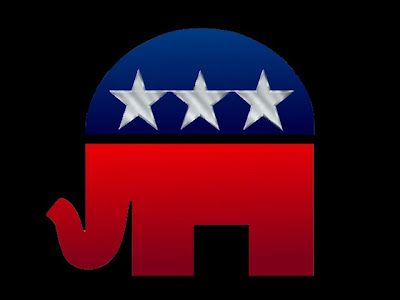 This is the inaugural installment of a new monthly Political Notebook survey of the candidates for the 7th Congressional District and an unscientific ranking of each candidate's chances of winning the GOP nomination in 2010.
***
The higher the candidate's ranking, the more likely he/she is positioned to win the nomination at this point and time -- and be put on the path to replace Roy Blunt in the U.S. House.

1. Billy Long - On the only two real pieces of empirical evidence we have, Long looks like the leader. He outraised the establishment during quarter one, with an impressive $145K fundraising haul. And he showcased his personal wealth by dropping 100 G's of his own. He begins with strong name identification (48%), an outsider's message, a cowboy hat and a charming southern twang. Long bolts out of the gate, propelled by anti-political likability and personal charisma. And by the looks of his finance report, he's already peeled off some of the traditional GOP donors. He's also a political novice, and promised to make it fun, which makes him the candidate in the field most likely to make a fatal mistake. Still, he's an Ozarks original. (Let's wait to see what happens when the consultants get a hold of him.) But, get some meat on those policy bones and Long may be most dangerous candidate in the field.
2. Jack Goodman - Goodman's entry into the race was no surprise. It was said he'd been being groomed for the position when Mr. Blunt decided to depart. Goodman is the anti-Long: Slim, soft-spoken, and suited up with political experience. Despite the populist environment, having the establishment still counts for something. Goodman pulled a coup when Reps. Shane Schoeller and Jay Wasson decided to step aside, but some Republicans are grumbling that he lacks the spark necessary to carry the 7th with the stature that's required in the conservative breadbasket. With Long in the race, it makes that charisma gap even starker. Goodman's been busy as a studious Senator. His real ramp up period comes mid May. That's why his second quarter, out-of-session campaign finance report will be a key barometer to measure come July.

3. Gary Nodler - He leads in the only private poll made public. But it was clearly designed to pump him up, and Nodler's been a bit cagey about his 2010 intentions. He's sending some signals he's not interested, that he'd rather travel the world with his wife than haul back and forth to Washington to be part of the Republican minority. But he's also quietly feeling out support, and keeping an eye on his rivals moves. The question is: Does a man who ran for Congress and lost, ever really lose the itch? And how do you pass up an open seat opportunity when you are the lion in the forest? Did we mention he's Appropriations Chair? If no one impresses Nodler (and it's doubtful anyone will), look for the Joplin Senator to get into the race -- but on his own terms. Of course, the minute he gets in, Long may just Steelmanize him, and call him "just another white guy in a suit."

4. John Putnam - He's not taken seriously by the political professionals, but as a Fair Tax advocate he automatically draws a small, but significant slice of support. Putnam, chairman of the Jasper County GOP, has recently been showing up at Tea Parties with fiery speeches. He's drawing crowds and winning good reviews -- simply for his tax reform message. That gives him a base of enthusiastic supporters to tap into. Putnam has yet to announce any official candidacy.

5. Jeff Wisdom - Who is Jeff Wisdom? We're still trying to figure it out. But this 39-year-old college professor was impressive at his campaign announcement, just for the sheer fact of the confidence he exuded. And he came out of nowhere. Is this the 7th's Seabiscuit? An Iraq veteran, Wisdom checks all the right conservative boxes -- but he separated himself by openly taking on Roy Blunt the day he announced. Taking on the man who could top your party's ticket in 2010 is quite the risk, but he gets credit for some political chutzpah. Now let's see him organize.

6. Kevin Elmer - The Nixa alderman has been quietly laying the groundwork for a campaign for months, but has not yet announced. That could change this May. Speaking to College Republicans at Missouri State recently, Elmer acknowledged he was nervous. But so far, he's the only person on the list who has articulated a clear set of principals and ideas he would follow in Congress. Term limits, no pay raise, work towards the Fair Tax. It's general but it's a start. Elmer will likely have to run a shoestring campaign and that will take a ton of gritty work. The Notebook would like to see him debate Wisdom for the "dark horse" crown.

7. The Unknown - Despite the list before you, there's still room for another compelling candidate with a niche or a different following. How about a candidate from Branson? Or, why not a woman? We dare not say "a moderate," but someone who strays from one of the GOP litmus tests? Sure, it's still the Ozarks. But it is almost 2010 folks.

8. B.J. Marsh - He's flirted with a candidacy, but that's B.J. for ya. The former central Springfield state representative has battled health problems, and endorsed Jay Nixon for Governor (yikes!). B.J.'s a tried and true moderate, which makes him a boffo interview, but a less than attractive candidate for primary voters. Still, his tourism business gives him hearty name I.D. But if he still has the itch, he may instead decide to rattle Bob Dixon's cage in the 2010 State Senate contest.

9. Hal Donaldson - On March 5th, Convoy of Hope president Hal Donaldson announced he had formed an exploratory committee. Almost two months later, we haven't heard a peep. The strongest signal Donaldson sent was his hire of former Matt Blunt/Sarah Steelman communications specialist Spence Jackson. Jackson is well-respected, and the hire of the likable spokesman seemed to show that Donaldson was serious. But he's gone dark since then. Lingering questions: Will he need to step down from his Convoy post if he runs -- and is it worth the risk? And is Tom Carter raising him any money?

10. Steve Helms - The Greene County Circuit Clerk said he's considering a run because none of the others in the field get him excited. The question is: Who does Helms excite? With all these other political hands to feed, Helms has to seriously consider whether he'd give up the seat he was just re-elected to, for the longest of longshots. One person that might be rooting for Helms to jump in? Gary Nodler. The more Springfield-centered candidates dive in, the more it divides up the vote, the better it is for the king of Joplin.

Our next 7th District Power Ranking will be delivered on May 31st.
Posted by David Catanese at 11:45 PM

It appears Jack Goodman is itching out his campaign message as, "the man who can take on Jay Nixon and the Dems" which is why he is firing away at Nixon over the tourism dollars.

On the other hand, Billy Long is running as, "the man who can take on the establishment."

Do the citizens of southwest missouri want to stick to the run of the mill partisan politics or vote for someone who aims to take on the establishment? That seems to be the framing of the two top candidates.

Can Billy Long run a grassroots ground game? Because it's going to get dirty.

The PAC's will come out in support of Goodman and if Long can't run a ground game -- his "lead" won't last.

Goodman needs to turn his weakness (being the establishment candidate) into his greatest strength (being the experienced candidate). I think we'll see him do this over time as he goes out of his way to battle Nixon and the dems.

Sure, it's still the Ozarks. But it is almost 2010 folksAnd what exactly is this supposed to mean? Care to enlighten us?

I took Dave's comment to mean that it's unfortunate women running in the GOP cannot gain political traction in Southwest Missouri.

Yes, Sarah Steelman did well against Hulshof in SWMO, but Hulshof is not from the area and Sarah had the "hometown advantage."

And if the Republican Party cannot adapt to the changes taking place with the electorate, they will begin to lose elections even in conservative Southwest Missouri in the next decade.

I took Dave's comment to mean that it's unfortunate women running in the GOP cannot gain political traction in Southwest Missouri.Thats false. Ever hear of Norma Champion? What about Kelly? Sandra Thomas? Locally there are numerous women GOP leaders - some are in very powerful positions.

Last I checked, many in this part of the country identify more with Governor Palin more than John McCain.

Unfortunately, your comments are stereo typical from the media elite class and are as shallow as they are right.

In case you missed that it means your wrong.

I would hope that Mr. Catanese is not insulting the viewership.

You're too impulsive and all too often incapable of rationally thinking your statements through.

1.) This whole post is in regards to primary races you goof. Of course a Republican (man, woman or horse) will usually defeat any Democrat in Southwest Missouri.

2.) Sandra Thomas is from Platte County... near KC... that's not Southwest Missouri last time I checked.

3.) Remember the game Where's Waldo? Try to find more... come on, you can do it. Check out reps for the state house and senate here:
http://house.mo.gov/listmembers.aspx
http://www.senate.mo.gov/09info/senalpha.htm
Then come back and lets see if the figures are ANYWHERE in proportion to the number of men serving.

You're such an "anti-media intellectual" Paul.

Hope you caught the sarcasm... cause I'm laying it on pretty thick.