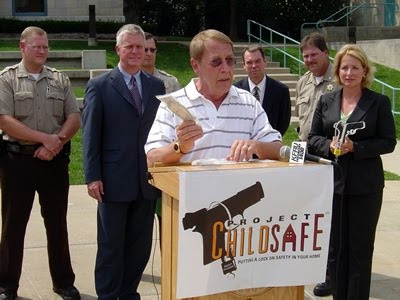 Robb fired off a letter to the editor to the state's six largest newspapers and The Notebook Sunday night that defends Icet's decision to stay on as Budget chairman. Icet and Schweich are vying for the GOP nomination for State Auditor in 2010.

"As a former vice-chair of the House Appropriations Committee, and more importantly, as a Missouri taxpayer, I was appalled to read Tom Schweich's criticism of my former colleague Allen Icet's selfless decision to remain House Appropriations chair through the next legislative session," Robb wrote.

"Perhaps, however, I should forgive Schweich for his ignorance. After all, he's never had anything to do with the state budget," Robb continued.

On Friday, Schweich encouraged Icet to relinquish the post after Sen. Gary Nodler, a candidate for the 7th Congressional District, said he would step aside as the Senate's top budget crafter in order to avoid any potential conflicts during a campaign.

"There is no way an appropriations or budget chair running for higher office can avoid the appearance of impropriety while accepting contributions from lobbyists and special interests who have business in the budget process," Schweich said in a statement released hours after Icet criticized the former U.S. ambassador for his loyalty to the Republican Party.

But Robb said "the easy way out for Allen would be to resign the chairmanship."

"By doing so, he could spend far more time campaigning, and he could avoid politically difficult decisions. To Allen's credit, he is not taking the past of least resistance. Instead, he's staying on because he has the most experience and is the best person to lead our state through this difficult budget cycle," Robb said.

"Kudos to Allen for having the courage to resist his opponent's ignorant request. And shame on Tom Schweich for putting politics above what's best for Missouri taxpayers," Robb said.

In his letter, Robb even goes further in his critique of Schweich by questioning his credentials and attempting to tie him to the Washington, D.C. beltway.

"How could he know how difficult the job is," Robb asks. "He wasn't there in 2005 when Allen helped save our state from the brink of fiscal disaster. In fact, Schweich has never worked in Missouri state government, where our state constitution requires balanced budgets and difficult decisions can neither be ducked nor deferred," he wrote.

"Instead, Schweich has spent his time in Washington, D.C. and Turtle Bay - where balanced budgets are the rare exception rather than the rule and there's always a bailout available by pushing the costs of rising deficits onto future generations of Americans," he said.

Robb's letter in the latest shot fired in a GOP primary for auditor that has intensified over the last five days.