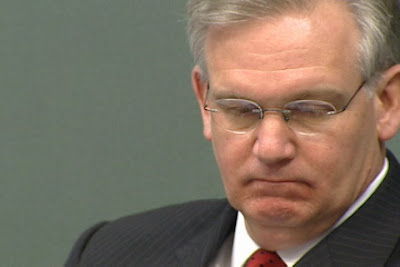 STATE FACES $340 M SHORTFALL
NIXON CONSIDERING WITHHOLDINGS
Plans To Announce Spending Controls in Coming Days
Gov.-elect Jay Nixon's Budget Review Guru Wayne Goode says the national and worldwide recession has "drastically curtailed revenues in Missouri."
***
"This is a downturn like none that we've ever seen in the past," said Goode in a statewide conference call with reporters Tuesday morning. The $340 million dollar shortfall is a number based on a projection for June 2009, the end of this fiscal year.
The A.P. Lede: "The budget adviser for Gov.-elect Jay Nixon says Missouri is heading for a $340 million shortfall. And that means midyear spending cuts are likely."
Goode says State Revenues in November totaled $7.6 billion, a $623 million dollar drop from May estimates. "It's changed significantly," says Goode of the state's revenue picture, blaming it almost entirely on the economic downturn.
***
Goode adds that the shortfall could "change up or down," and says there's a high level of uncertainty and unpredictability in this volatile economy.
Says Nixon is working on "efficiencies in the existing budget," and will be announcing his initial steps to control spending within the next few days. Dipping into the state's "Rainy Day Fund" for cash-flow purposes is on the table, according to Goode.
Doubts layoffs, saying, "Finding efficiencies isn't the same thing as laying off people."
Won't address the plight of campaign promises like reinstating the Medicaid cuts or boosting funds for higher education

"The economic challenges we face are historic, and in order to solve them, we will need a historic bi-partisan effort. Because when a crisis hits, whether it be a national security crisis or an economic crisis, we must put politics aside and come together for the good of our Missouri families. We must all share in the sacrifice, and we must all be part of the solution. That’s why I will be asking Democratic and Republican lawmakers to join with me in taking bold steps to make government more efficient, more effective and more responsive to Missouri families.

"The people of Missouri want to take our state in a new direction, and that’s exactly what we’ll do. Working together, we will create new jobs, make health care more accessible and help middle-class families make ends meet. But in doing so, we’ll live within our means and create a government that is more efficient and responsive. That’s how we’ll bring about the change our state needs.

"Earlier today, I joined other Governors and Governors-elect to discuss our economic challenges with President-elect Obama and Vice President-elect Biden. The President-elect clearly understands the pain that families are feeling, and he has indicated that his administration will work aggressively to pass the type of economic stimulus package that will help us move Missouri forward," said Gov.-elect Nixon.

Republican Rep. Shane Schoeller, Willard (139th): "I'd like to see more data before I comment too quickly. I think we've all been anticipating a budget shortfall."

Republican Rep. Bob Dixon, Springfield (140th): "I'll be interested to see the specifics of it. We've all been waiting to see the consensus revenue estimate."