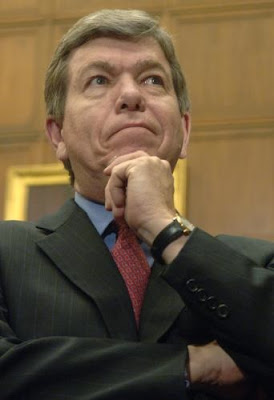 RESHUFFLING THE DECK
Craighead, Perron now on the outs, according to a knowledgeable Republican
Roy Blunt's campaign for U.S. Senate underwent a major shake-up this week with several longtime allies being told they wouldn't be at the top of the campaign structure, as originally expected, a GOP source tells The Notebook.

Jared Craighead, who is finishing his term as executive director of the Missouri Republican Party, will not become Blunt's campaign manager, according to the source, who has deep ties to Republicans across the state, but requested anonymity because of the sensitivity surrounding the discussions and decisions.

Craighead was widely believed to be Blunt's campaign manager in-waiting. At statewide Lincoln Days in Kansas City last month, Craighead donned a "Blunt for US Senate" sticker on his jacket, even though he still was serving in his capacity as a top state party leader.

Blunt's top Washington fundraiser, Jay Perron, has also been let go for the time being, according to the source. Perron has been a top D.C. Blunt moneyman for years, mostly organizing fundraisers inside and around the Beltway. The source said Perron's services won't be needed right now because, "Roy's not going to be able to raise a lot of D.C. money." "Raising money for a candidate who will be in the extreme minority in the U.S. Senate anyway, is tough," explained the source.

Perron did not return an e-mail message and a phone call from The Notebook Saturday.

The obvious question: Why is Blunt making these moves now -- a full 20 months before the general election? The source said that Blunt and his closest advisers must have realized that they were putting together "a totally unwieldy campaign apparatus, a 10-headed monster." The move was not only politically important, but financially prudent.

"These guys had a 10-person top apparatus. It was way too big and bloated, and would lead to a high burn rate," said the source, referring to the cost it takes to pay all the employees this early in the cycle. "I think they had to come to this decision."

There are some questions if Chuck Poplstein, who sent out the original "Draft Roy Blunt for Senate" message, will wield a major role. It seems that former Blunt fundraiser Tom Carter of Ozark, will be devoting most of his time to the 7th District Congressional candidacy of Hal Donaldson.

In a short e-mail to The Notebook, Blunt campaign spokesman Rich Chrismer did not specifically address the status of Craighead or Perron or any other roles in the campaign.

"We have made no campaign management announcements, but we are building a good team," Chrismer said in an e-mail. "Our greatest strength remains our candidate."

A key player in any statewide Republican candidate's fundraising is Karen Mohan Day. Day, of Wildwood, is the single most powerful GOP fundraiser in the state, claiming to have helped haul in an estimated $60 million dollars for various Republican candidates over the past 15 years.

According to two sources, Day has yet to sign a long-term deal with Blunt, and is instead helping him so far on an event-by-event basis. "The fundraising isn't going as well as expected," said one GOP staffer, who knows Day but is currently unaffiliated with any campaign.

"She's worried that, following (Kenny) Hulshof, she can only leverage her donor relationships so many times on behalf of flawed candidates," said the other source. Day was not reachable on Saturday. Hulshof lost the Governor's race to Jay Nixon by a staggering 19 percentage points.

Blunt's next Springfield fundraiser is set for Monday, March 30th at Metropolitan Grill. Attendees are being asked to donate $2400.

Some of the comments about the inner-workings of the campaign feed into the impression that Blunt is an inherently weak candidate who will not be able to defeat likely Democratic nominee Robin Carnahan. It's a view held by loyalists close to former State Treasurer Sarah Steelman and Blunt enemies alike.

But for now, Blunt is the only publicly announced Republican in the race, and the clear frontrunner for the nomination. While Steelman is likely to jump into the U.S. Senate contest at some point down the road, she's mostly operating a shadow campaign at the moment. She has made at least two trips to Washington D.C. to meet with potential consultants and fundraisers, but most of her moves have been purposely under the radar. While Blunt is packing his weekends with Lincoln Day events, Steelman's political meetings have thus far been small and private.

"Blunt will work hard. He's a good campaigner," said one Republican close to the Congressman.

One perceived weakness of a Steelman candidacy is her ability to raise enough money to stay competitive with Blunt, in what would become an expensive primary. In her primary race for Governor, Steelman largely depended on Springfield financial adviser Jeff Layman and Kansas City fundraiser Danny Pfeifer. Allies on both sides of the Blunt-Steelman divide believe a primary would require both candidates to raise a significant amount of money outside the Show-Me state.