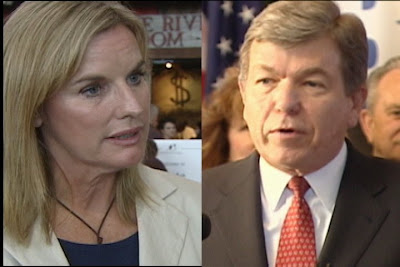 FLASH POLL:
CARNAHAN 47%, BLUNT 44%
CARNAHAN 47%, STEELMAN 39%
***
BLUNT CAMPAIGN RESPONDS: "Push polling is a nasty tactic and these tactics do not merit a response from the campaign."

A new U.S. Senate poll shows Democrat Robin Carnahan leading both of her potential Republican opponents in the 2010 contest, but the numbers also point to some political vulnerabilities of Congressman Roy Blunt.
The poll, taken by Republican pollster Wilson Research Strategies and released to The Notebook Thursday, shows probable Democratic nominee Carnahan leading Blunt 47% to 44%. It shows Carnahan leading former State Treasurer Sarah Steelman by a larger margin, 47% to 39%.
The poll, taken between March 7-9, surveyed 600 likely voters in Missouri. It has a margin of error of 4 percent.
The numbers also reveal that although Blunt is much more well-known than Steelman, he carries higher negatives among independents and Democrats. Pollster Chris Wilson said the results highlight Blunt's inherent weakness as a candidate.
"My conclusion is that he starts out with serious issues that are difficult to overcome in the general election, if not the primary," said Wilson in an interview.
On the other hand, the data also reveals that Blunt is stronger within his own party, and that Steelman plays better with "soft Democrats," a potential liability in a GOP primary.
Wilson said the poll was taken as a feasibility study for a potential Steelman U.S. Senate candidacy. But Steelman did not pay for the poll. Wilson said because of his company's confidentiality clause, he could only say that a third party unaffiliated with Steelman paid for the data.
The Blunt campaign's response to the poll was short but pointed: "Push polling is a nasty tactic and these tactics do not merit a response from the campaign," said Blunt spokesman Rich Chrismer.
When asked about the merit of the topline general election numbers, Chrismer repeated his original response.
Wilson, who conducted the poll, was fired from the head of Qorvis Communications back in 2004. According to The Oklahoman, the local business' parent company filed a lawsuit against him for "stealing corporate secrets and cash while plotting to launch a competing firm." Wilson is quoted saying the lawsuit was prompted by a business dispute.

THE INTERNAL NUMBERS:
NAME I.D. (General Electorate)
BLUNT 97%
STEELMAN 75%
FAVORABILITY WITH (General Electorate)
BLUNT 50% (33% unfavorable)
STEELMAN (not included)
FAVORABILITY WITH REPUBLICANS (400 Republicans 5% MOE)
BLUNT 76% (10% unfavorable)
STEELMAN 47% (19% unfavorable)
FAVORABILITY WITH INDEPENDENTS
BLUNT 51% (37% unfavorable)
STEELMAN 41% (15% unfavorable)
FAVORABILITY WITH SOFT DEMOCRATS
BLUNT 25% (50% unfavorable)
STEELMAN 39% (13% unfavorable)
The survey also measured support for Blunt and Steelman after a biography was read to respondents about each candidate. A significant portion of the information given to the voter was negative, in order to test arguments against a candidate.
Wilson said Blunt's paragraph included information about his vote for the original fall financial bailout, his support for earmarks and his ties to disgraced lobbyist Jack Abramoff. Wilson said after measuring "informed voters," Blunt loses almost half of his support from soft Republicans and drops nearly 20 points among independents. Without access to the full paragraph, it's impossible to gauge the fairness of the wording.
"INFORMED VOTERS"
CARNAHAN 55%
BLUNT 30%
Wilson said that "voters are particularly angered when they learn of Blunt's involvement with Jack Abramoff, and that he was one of the largest recipients of Fannie Mae and Freddie Mac campaign contributions."
"The same negatives will hurt Blunt in the Republican primary, where after voters hear this information, he trails Sarah Steelman by more than 20 points," according to the report on the poll.
Wilson's memo concludes that once voters become aware of these negatives of a Blunt candidacy, his "soft support will vanish."
On the other hand, Steelman, Wilson writes, "is uniquely positioned to win over independents and moderate Democrats, while inspiring Republicans with her opposition to bailouts and overspending in Washington."

Posted by David Catanese at 5:58 PM

If the polling suggests Blunt doesn't do well with swing voters or centrist democrats, I wonder when Republican Party insiders will quit picking their primary winners and realize that a Republican candidate can't win by just courting their party in a GE.