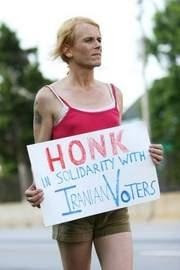 Potts was one of nine arrested that were protesting Lieberman's ties to the health insurance industry.

In a release, Potts said she was taking part in a demonstration organized by Mobilization for Health Care for All," a nonviolent campaign to end private health insurance abuse."

"A US Senator should not be taking campaign donations from corporations over which he or she has legislative/regulatory authority," said Potts. "Senator Lieberman's willingness to prioritize profits over people makes me sick, so I felt moved to demonstrate to him that the American people demand Universal not-for-profit heath care for all, now!"

*WATCH VIDEO HERE*
Potts can be seen around :53 in

Potts has been arrested in Washington, D.C. before and was the first transgendered candidate to run for Congress, when she ran for the Republican nomination for the 7th District in 2006.

Posted by David Catanese at 1:10 AM