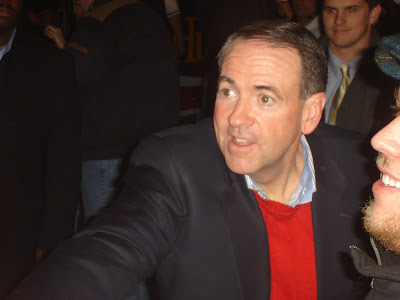 Former Arkansas Governor and Republican presidential candidate Mike Huckabee will be in Springfield Monday to do a signing for his new book.

Huckabee will be at the Barnes & Noble bookstore on South Glenstone at 4:30 p.m.

An e-mail to supporters of his political action committee says, "If you can, please send an e-mail out to your contacts telling them where I will be and ask them to stop by on November 9th at 4:30 p.m."
***
Huckabee hosts his own political talk show on the Fox News Channel. He's widely seen a top contender to run for the GOP presidential nomination in 2012. In September, he won the Family Research Council's straw poll by a more than a 2-to-1 margin. He recently topped a Rasmussen survey of potential 2012 GOP hopefuls, besting both Mitt Romney and Sarah Palin.
Posted by David Catanese at 9:29 PM