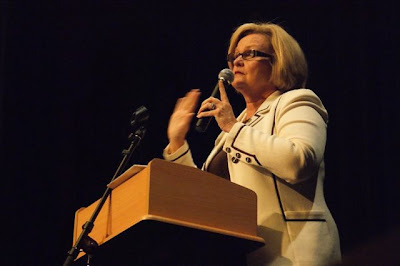 A LOSS OF PUBLIC TRUST

Beyond the outbursts and interruptions, people from West Plains to Ozark came to Monday's townhall meetings armed with questions and saddled with sentiment that showed their lack of trust in government.

"The government programs have never helped us before. Social Security is bankrupt. Post Office is bankrupt. Medicare, Medicaid's bankrupt. Amtrak is bankrupt. And I don't see how that it's feasible for the government to take over our healthcare, when their other organizations have all failed," said Cindy Temple of West Plains who inquired why medical malpractice reform, tax credits and health savings accounts aren't being included in changes to healthcare.

"I don't want the government to tell me what I can and not have," said Vietnam veteran Melvin Cole of Ozark, at the Springfield townhall.
WATCH THE KY3 NEWS @ 6 REPORT HERE
ALSO . . . HOW WILL THIS LINE SIT WITH THE LEFT?
"I think it will be pared down, it would be doing as much, won't be as broad," said McCaskill when asked about the pace and scope of health care legislation. 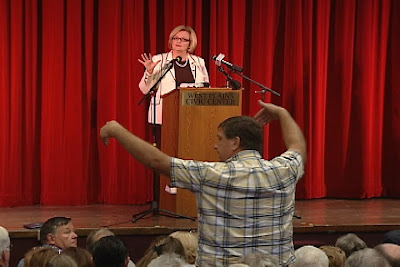 "It's In There . . . Don't Tell Me It's Not"
WATCH THE KY3 NEWS @ 5 REPORT HERE
A give and take . . . Cheers, but more boos . . . and skepticism throughout.
Sen. Claire McCaskill took her share of punches from crowds in West Plains and Springfield Monday, but also doled out some of her own, pledging she'd only support a government option in healthcare if private insurance is protected.
McCaskill also got in a tit-for-tat with a woman over whether abortions would be covered in the legislation.
"It is black letter law, black letter law that not one dime of federal tax money can be used to fund any abortion," said McCaskill.
"It's in there! Don't tell me it's not!," shouted one woman.
"I understand your opinion Ma'am. I'm just telling you factually right now, The Hyde amendment is the law of the land," McCaskill responded.
Posted by David Catanese at 6:21 PM

The fact is, the Hyde amendment would not cover the part of the bill which calls for the HHS director and its board to decide what coverage is mandatory.

Its the same part of the "death board" schema which is being under (or not accurately) reported.

There was an amendment proposed just before session break by a Democrat who wanted to spell out in black and white to remove funding for abortions. It was defeated in committee.

Further more, the insistance that you did not check the bill and simply repeated McCaskills claim leaves this particular post flopping in the wind and providing more reason to believe this blog is tilted biased toward McCaskill, Democrats or both.

Dont take my word for it, Factcheck.org has an entire piece published on the 21st of August which I posted in a comment on this very blog.

The Hyde Amendment has been the law of the land since 1976 and permits abortions only in the case of rape, incest, or to save a woman’s life. Legislating when a woman can have an abortion is completely ineffective and demonstrates a lack of a fundamental understanding of the issue. The situations that can result in an abortion are so varied and complex that it is impossible to ethically stipulate when it is ok.

You are correct in saying that the Secretary of the HHS can amend what coverage is mandatory, though it’s unlikely there will be such a move -- full medical services need to be covered in this plan and we shouldn’t limit the ability of individuals to make private, personal choices about their lives and health. Either way, anti-choice advocates are allowed to choose a plan without abortion. So if you like your healthcare plan – keep it.

This is exactly the same kind of scare tactics Americans voted against last year.

You worry about government controlling our lives, but large corporations also control our lives – often making life and death decisions that affect us.

Deregulation and privatization don’t eliminate government; they only make it unaccountable and take away its moral mission to serve the people. Health care isn’t a commodity – it’s a matter of protection.

We are talking in terms of pain and suffering – of life and death.

Protection is a moral mission of our government, but not for big businesses.

Denying care when one’s family members health or life is at stake is fundamentally life-denying. That’s exactly what the current system does.

Actually, you are wrong.

The Hyde Amendment prevents PUBLIC FUNDING for abortions. It does not address the various situations which may or may not occur.

The points you posted are precisely why the amendment to prevent public funding for abortion in the health bill necessary, but was rejected. As the bill currently stands the decision on whether or not abortion is in or out of basic plans (and is funded) resides in the hands of the HHS secretary.

It is for this reason why McCaskill (and this post in its earlier written form) does not spell out the intent of this particular piece of legislation and is misleading at best.

Again, dont take my word for it. Read the bill.

I am correct. The Hyde Amendment allows for certain exceptions. Since you probably won't believe it until you see it on a media outlet owned by Rupert Murdoch, check it out for yourself.

McCaskill was completely in the wrong to use her dairy farm comment. She along with the other politicans is what caused the problems in the dairy industry when they subsized corn for ethenol. Dairy farmers deserve the governments help because they control the milk and cheese market through a federal pricing order which she probably couldn't explain how that works let alone milk a cow. Get clue Claire!

Gumshoe - sorry, yet again the facts fail you.

umm... Paul... did you read the end of the second paragraph of your own source?

Even though you provided a source to ...actually confirm my claim. Wiki isn't usually an academically acceptable place to use as a source.