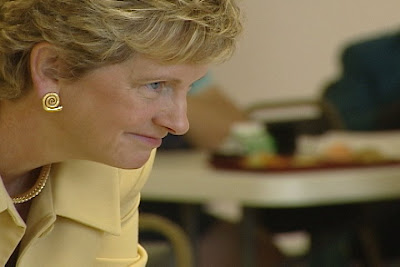 In her most specific answers on the issue to date, Democratic candidate for U.S. Senate Robin Carnahan said she would be open to supporting a government run option as part of the comprehensive healthcare reform legislation that's recently hit significant speed bumps in Congress.

Carnahan also did not rule supporting paying for a plan by raising income taxes on those earning more than $1 million dollars a year, an idea that's already earned the backing of many House Democrats and President Obama.

"It's a broken system, it needs reform, and to just go out there and say no to everything is not what I agree with," Carnahan said, in a veiled swipe at her likely 2010 Republican opponent, Roy Blunt.

Choosing her words carefully, Carnahan said she would not rule out backing a public option "depending on what it looks like." "That's not something I'm going to rule out. What I think we've got to do is create competition," she said.

When asked about how to pay for the massive overhaul plan, Carnahan was less precise -- neither embracing the millionaire's tax nor wholeheartedly rejecting it.

"I'm not going to take a position on what that number is. I will tell you, that I'm not for putting it on the backs of the middle class," she said.

Blunt's campaign jumped on Carnahan's comments and said they showed her willingness to raise taxes. "Roy Blunt opposes raising taxes. Robin Carnahan just said she would not rule it out," said spokesman Rich Chrismer. "If she does not know where the middle class begins and ends today, wait until the liberal D.C. bureaucrats in Washington tell her," Chrismer said.

But on Thursday, it was Blunt's comments that were in the crosshairs, when he seemed to suggest Republicans wouldn't even attempt to offer a healthcare alternative.

"Our bill is never going to get to the floor, so why confuse the focus? We clearly have principles; we could have language, but why start diverting attention from this really bad piece of work they've got to whatever we're offering right now?," Blunt told The Hill.

Minority Leader John Boehner later clarified to say that Republicans were putting the "final touches on their bill."

Carnahan also attempted to paint Blunt as an obstructionist who's content with doing nothing but opposing the president's plan. "Congressman Blunt and I disagree about this. He wants the status quo. He seems satisfied with how things are working in healthcare. I don't," Carnahan said.

Chrismer called that "the Obama straw man argument," and said that Blunt supports the principals of choice, competition, transparency and "decisions made by doctors and patients."

"He opposes the Obama plan to spend one to two trillion dollars that we do not have so that government can take over health care and impose rationing and waiting periods that are unacceptable for American families," Chrismer said.

But Carnahan said the government take-over argument is stale and not based on reality.

"I think to myself, have you been to the doctor lately? Because there's already somebody standing between you and your doctor. It's called the insurance companies," she said.

For Carnahan, the healthcare argument is deeply personal. The Democratic Secretary of State was diagnosed with breast cancer in 2006, but detected the disease early. In using the medical system, she said she found out quickly that it was difficult to figure out the price of procedures.

Top Democratic leaders have conceded this week that they are unlikely to produce a healthcare bill by the August recess. Meanwhile, on Friday, House Republicans lugged 17 boxes of amendments around the Capitol and repeated their calls that more time was needed for debate.

"It took the President six months to decide how long and which puppy he was gonna have,” said Rep. Nathan Deal (R-Ga.), as quoted by the Talk Radio News Service. "To expect Congress to do something on major health care reform in six days is totally irresponsible."

Posted by David Catanese at 6:04 PM