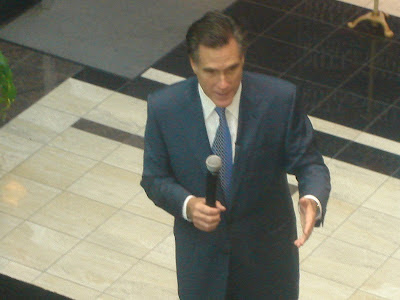 Insta-dial focus groups have always seemed a bit odd to me. Can you imagine turning a dial on every second of a candidate's response? And are these people really "undecided" or just looking to get on TV? In any event, Romney overwhelmingly scored well with "undecided" voters in a post-debate FOX focus group. Then again, cynics might say that Romney is the ultimate poll-tested, focus-grouped candidate.

"This was a terrific debate for Mitt Romney," said Fred Barnes of The Weekly Standard, citing his answer on immigration.

NBC Political Director Chuck Todd said the debate framed the Republican race as one of change vs. experience. He puts Romney and Huckabee on the side of change, with McCain, Giuliani and Thompson on the side of experience. As far as the Romney vs. McCain match-up, Todd called it a draw.

Time's Mark Halperin called the debate for Romney, grading him an A-. "Admirably recovered from Saturday's disastrous debate," commented Halperin.

Huckabee seemed a bit defensive during this debate. He wouldn't directly answer Romney's challenge on raising taxes in Arkansas, and looked off-balance and caught off guard. Maybe it's because he didn't have an audience to play to? Still, Huckabee doesn't need a win here. Third would be just fine.

Erick, at RedState scored the win for . . . ABC News and Charlie Gibson. "Theirs was the best debate --- bar none," he said. On the substance, Erick gave the nod to Romney as well. "Mitt seemed even paced all night," Erick wrote.

I am one of those cynics.