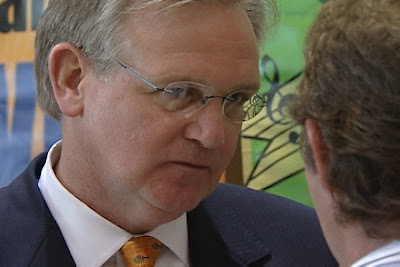 From 60 to 50
SurveyUSA polling shows Governor Jay Nixon has lost 10 points in his job approval rating over the last month, dropping to 50% -- a typical benchmarch for political trouble.
While the polling does not specifically indicate the reasons for the drop, some Democrats, speaking on the condition of anonymity to The Notebook to talk freely, said they believe the E-Coligate scandal as well as the Governor's cuts to tourism are direct causes of Nixon's polling erosion.
50% Approve; 41% Disapprove
Read the poll HERE.
From July to August:

Note: The party affiliation break-down changed slightly from July to August. In July, 27% polled were Republicans compared to 30% in August.

ALSO: Of the 12 other Governor's polled, Nixon marks still ranks him higher than just two of his peers -- Alabama's Bob Riley (61%) and New Mexico's Bill Richardson (55%)

One Dem e-mails, "It's a pretty scary drop."
***
AND: Karen Dillon, the woman who broke the DNR story, ushers in September . . .
Even as a Missouri Senate committee investigates the monthlong delay of the report, Joe Bindbeutel told The Kansas City Star in an exclusive interview that the decision was his.

“It was a mistake,” said Bindbeutel, a former deputy director at the Department of Natural Resources.

But Bindbeutel’s version of events continues to raise questions about the role of Gov. Jay Nixon’s office in the controversy.

Posted by David Catanese at 9:53 PM