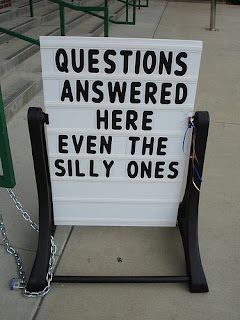 Answers to the 12 questions The Notebook had about the 7th District Congressional candidates "Patriot Day" primary:
Q1: How many jokes Billy Long will deliver -- and if he's got any new ones.
A: Counting Billy Long jokes in a speech is like counting stars in a clear summer night sky: After awhile, you're doing to lose track. Long pretty much delivered the same stump speech he gave at his announcement. "I'm not from the government, but I'm here to help," will surely show up in Long's television ads next year. This time, the hulking Long opened with: "Can you all see me behind this mic stand?" And when KSFG staff instructed him to move the microphone to the right to avoid interference with the speaker, Long quickly delivered, "I knew you wouldn't want to move it to the left." It took just 20 seconds for Long to win the crowd over.

Q2. What gets bashed more -- the stimulus OR government healthcare.
A: I thought it'd be closer, but since healthcare is dominating the news right now -- it received the majority of the criticism.

Q3. The kind of reception "the base" gives Darrell Moore.
A: Moore's first line was meant to establish his cred: "My name is Darrell Moore and I'm a conservative and not in a bad mood about it." It received mild applause, but it was a good attempt at injecting some levity into his prosecutorial tone. Moore's speech was much improved from his announcement. His theme was a return to fiscal stewardship, which sold well. The meat Moore threw at the conservative crowd was more pink than red, which suits his style. But his call for a federal spending freeze seemed to resonate. If Long won the day, Moore gets most improved.

Q4. Since Jericho is for Wisdom, how much of the crowd will be pro-Wisdom.
A: Despite showing up at his announcement (and no other candidate's) Vincent David Jericho wrote in The Notebook's comment section that he's endorsed no one in the primary. Still, because he was overseas Jeff Wisdom got the luxury of speaking first via phone. And he got steady applause throughout his speech. The KSGF crowd is not the TARGET BBQ GOP crowd. They're less buttoned-down and more populist; less candidate-focused and more issue-focused; less establishment and more blue-collar middle class; less likely to write a check and more likely to bring a homemade sign. Wisdom got a better reception there than he'd get at a local party-sponsored event.

Q5. If any of them publicly praise Roy Blunt with the knowledge of Jericho's feud with the Congressman.
A: Nobody mentioned Blunt, not even Sen. Chuck Purgason, who's running against him. But Jericho did once at the beginning, saying the Congressman won't return his calls.

Q6. Who wins the sticker/sign ground war.
A: There wasn't really a war. Signs weren't permitted; except for Wisdom, since he couldn't appear in person. In an unscientific parking lot survey, I saw one bumper sticker for Billy Long and one for Jack Goodman. Long had several people handing out business cards with his issue list and phone number; Goodman also had staff in attendance but Nodler did not.

Q7. Who gets more applause Goodman or Long.
A: Long by a longshot. Of all the Republicans, Goodman spoke last. So in his defense, the crowd was probably getting a bit tired. But the Mount Vernon Senator didn't get one round of applause during his speech. Only independent Dean Moore spoke after Goodman, and he won more applause. Goodman paid his dues, but this wasn't his crowd. It's probably too early to surmise if that's going to be a significant problem for him.

Q8. Who gets more applause Goodman or Nodler.
A: Nodler. Nodler, who spoke third to last, kept it short and focused on his upbringing and background. He didn't seem to want to bore the crowd going over the same checklists, so he thanked the veterans and predicted the defeat of Democrats in 2010. Both are always safe bets for applause at conservative events.

Q9. Which candidate delivers the most red meat for the right.
A: This one again goes to Billy Long. He bashed Obamacare, skewered earmarks and out-of-control spending and lambasted career politicians. He also was the only candidate to mention his pro-life and N.R.A. credentials. Oh, and he's for tax cuts too. Wisdom hit a lot of the right notes as well, advocating for the federal government to have no role in education and warning of a creep towards socialism. Interestingly, Goodman also used the socialism charge; Darrell Moore did not.

Q10. If any of the 7th District candidates clap for anything Purgason says.
A: Yes. Sen. Purgason kept his speech focused on issues, and didn't attack Blunt. So on broad issues of a agreement among the GOP, he got applause.

Q11. Dean Moore's relevancy.
A: Sad to say, but it's likely little. A little-known independent sold well with this crowd, but doesn't likely have the traction or finances to take on the two-party structure. Speaking in a shirt and tie on a hot summer day, Moore said he doesn't trust the two-party system. A lot of people sympathize with the sentiment, but in the end they stick with the options on the menu.

Q12. Which candidate has grown/sharpened his message the most since entering the race.
A: Darrell Moore. Still a bit too long, but his speech was tighter. His message was clearer than opening day, when he shoveled in too many historical references. He also infused some humor, personality and personal anecdotes. It all helps to humanize the speech.
CATANESE'S OVERALL TAKE:
Long won the day based on pure speechifying. It'll be hard for any of the candidate's to top Billy in this department. But throughout his humorous and off-the-cuff repertoire, Long has a tendency to make some statements that could come back to haunt him. He mocked the plight of the uninsured ("Get out the crying towel") and claimed that 26 million people under 35 probably don't want health insurance anyway. Claiming that President Obama's healthcare plan might have taken his mother's life back in March of 2008 is also quite a strong charge. It's all done in the loving-aw-shucks Long way, but in a competitive race where a sliver of moderate Republicans could matter, those statements may rub some the wrong way.

On the other hand, Long is obviously attracting the attention of his opponents. Goodman's indirect but clear jab at Long's joke-making and his lack of experience is the first evidence he views Long as a threat. Goodman also identified himself as a "citizen-legislator" who ran his own business. The goal is to push back at Long's broader assertion that the rest of the field is just a bunch of pols. That'll be a tough argument for Goodman to sell. My guess is that his stronger argument is that he's a politician who's stood up to power (i.e. The Village Law). With cynicism in the air, Goodman probably needs to lay out more reasons why he won't just be a GOP establishment rubber stamp. Darrell Moore also had his own take on Long's "I'm not from the government theme". In fact, in touting his work as prosecutor he said, "No, I'm not from the government and here to help, I'm saying I have made your government work for you . . ." One year before the primary and Long has set the debate: I'm not the pol, they are. You're angry, and you know me, so it seems like a good time to try something new. His rivals see that this has selling potential, and they're gauging how to best respond. The more Long freelances, the more potential ammunition his opponents will have to pick apart later -- to try to show he's inexperienced, lacks substance or doesn't have the proper gravitas. But attacking Billy will be difficult task, because humor is a powerful defense.

Shalom, Catanese ~ Now that you followed up your own 12 questions (they were not mine, entirely) with substance they do not appear as cynical as they were when first presented. Furthermore, I would give you "most improved" in reporting analysis. You seem to be gaining better insights on how Southwest Missouri voters work and react (differently in tone and substance than New Jersey pols, I imagine). Keep following the "Great Guests" who appear as a Special Guest on "Ramble & Rumble with Rabbi" hosted by Rabbi DF Eukel listed at our web site www.EUKEL.us and the archives at http://www.BlogTalkRadio.com/RabbiEukel. Wisdom, Long and Goodman will be Special Guests on "Ramble & Rumble with Rabbi" hosted by Rabbi DF Eukel next week Aug 24, 25 & 25. Catanese, himself, will make a second appearance September 10. Love & Prayers, Rabbi Eukel 466.3373

Thank you for attending and the coverage

I was there and thought Long stood out over the others. If he wants to get something done in D.C. I think he has the clear ability to do it. I do not trust the politicians that are running against him.

I would like to see more of Wisdom when he gets back from serving our country.

Sounds like the 7th has found their own Mike Huckabee in Billy Long.