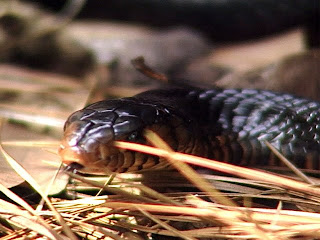 JEFFERSON CITY, Mo. (AP) - A snake is being blamed for a power outage at the Missouri Capitol.
The electricity went out in downtown Jefferson City for about an hour Tuesday as lawmakers were debating legislation and scores of schoolchildren were touring the Capitol.
AmerenUE spokeswoman Susan Gallagher says a black snake got into the underground electric cables near the Capitol, causing two cables to short out. The snake got electrocuted.
Several people were stuck in Capitol elevators when the power went out around noon. Capitol Police Chief Todd Hurt says they all were freed within 20 minutes, and no injuries were reported.
The power outage also affected the Governor's Mansion and various other downtown buildings.
Posted by David Catanese at 2:02 PM

The fourth grade class from Truman Elementary here in Springfield were in the capitol building when this occurred. Their stories are quite entertaining. You should hear them first hand.