Nixon Plan Would Expand Medicaid to 35,000 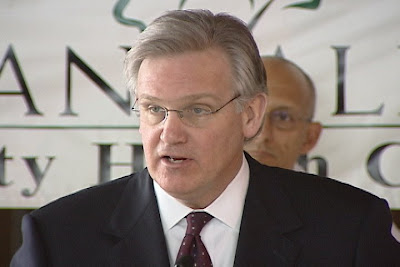 DEALMAKER
WATCH THE KY3 NEWS @ 10 REPORT HERE
Governor Jay Nixon announced a healthcare agreement with state hospitals Monday that would expand Medicaid coverage to 35,000 parents by tapping into more federal funds.
According to the deal unveiled in a flurry of stops across the state, the Missouri Hospital Association would contribute $52.5 million dollars annually, which would draw down almost double that amount in matching funds from the federal government.
It adds up to a pot of $145 million dollars that Gov. Nixon boasted could be used for low-income healthcare "at no increase cost to state taxpayers."
"This is simply an opportunity we can't afford to miss," Nixon said during a stop in Springfield at the Jordan Valley Community Health Center. "Providing healthcare to 34,000 more Missourians at no extra cost. It's not just the right thing to do . . . it's the smart thing to do for our economy," Nixon added.
Nixon's plan does require legislative approval. That means convincing a Republican-controlled legislature to increase Medicaid eligibility to 50 percent of the federal poverty level from its current level of just 20 percent.
Republicans have voiced considerable opposition to expanding any type of social welfare programs during a period of declining state revenue.
Posted by David Catanese at 11:58 PM