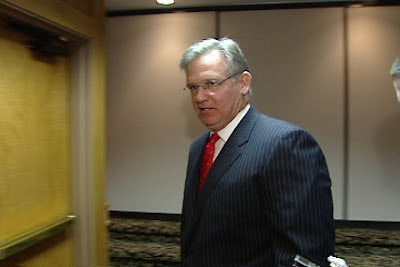 MAKING THEM PLAY DEFENSE
On the eve of back-to-back Republican primary debates, the expectant Democratic nominee for Governor decides to change the subject to healthcare, something both G.O.P. candidates have avoided offering specific details on.
Nixon campaign acknowledges that the timing is strategic . . .The 3-city tour is meant to put the Republican candidates on the defensive on an issue they've ignored most of the primary campaign. Democrats want Kenny Hulshof and Sarah Steelman defending Gov. Matt Blunt's Medicaid cuts and for people to be reading about it the same day they debate each other.
Stops are set for St. Louis, Columbia and Kansas City, NOT Springfield . . . in order to hit "the big markets in a straight shot."
In addition to the rhetoric, Nixon will release specific numbers on exactly how he plans to reinstate coverage, the mechanisms he'll use, what areas he will target and how he will pay for it
What will Hulshof and Steelman say now?
--VS.--
What should they say?
AGREEMENT ON "INSURE MISSOURI"
Steelman and Hulshof both favor Gov. Blunt's approach forward
Here's what Steelman said about it in a recent interview:
Here's what Hulshof said in the Lake Ozark debate back in June:
Posted by David Catanese at 11:00 PM