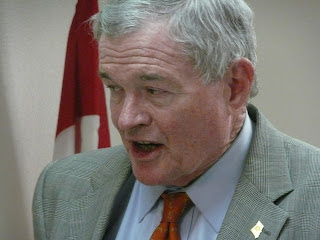 Sen. Kit Bond's spokesperson Shana Marchio pointed me to a White House statement regarding Bond's involvement in the FISA bill.

As posted here earlier, The Hill reported that Bond had been cut out of White House negotiations. The White House says that's not true.

"An article published today in The Hill newspaper quotes assertions by Democrats regarding the nature of the White House’s communications with Congress on these discussions and deserves a response. At every step of the way throughout the Congressional discussions, the White House has coordinated with Senator Bond and other Republican members, and Senator Bond has led discussions with Majority Leader Hoyer, and House Republican leaders and ranking Committee members. The recent compromise offer on FISA legislation was crafted by Senator Bond and Republican members. Anyone who has been following this issue knows that Senator Bond has been leading the discussions with the House for months. The assertions in the article are simply inaccurate," said White House Deputy Press Secretary Tony Fratto in a statement.

"The White House continues to believe that the best FISA modernization legislation is the bipartisan Senate bill that resulted from the cooperative efforts of Chairman Rockefeller and Senator Bond, and we still believe that the best outcome would be for Congress to pass this bill and send it to the President," Fratto added.
Posted by David Catanese at 4:56 PM