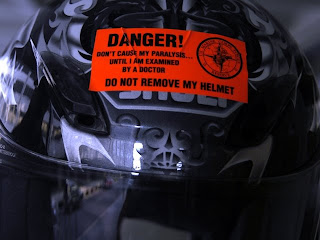 JEFFERSON CITY, Mo. (AP) - Missouri Transportation Director Pete Rahn says legislation repealing the state's motorcycle helmet law for adults "makes no sense" and that Gov. Jay Nixon should veto it.
Lawmakers during their annual session that ended last week approved a bill that would lift the helmet requirement for those who are at least 21 years old and not traveling on interstate highways.
Rahn on Wednesday denounced the bill in front of the emergency room of a Jefferson City hospital along with two doctors and a motorcyclist who says he survived a 2006 accident because of his helmet.
A spokesman for Nixon said the governor plans to review the legislation.
Supporters of repealing the helmet law contend motorcyclists should be allowed to decide for themselves whether to wear helmets.
For more of our coverage on the helmet law debate, click HERE.
Posted by David Catanese at 1:59 PM

The word CHOICE in this case is a scare tactic.This is not a flat land state were you can see far ahead.Most motorcyclists know that wearing a helmet is the right thing to do.This has come up year after year and the lobbyists for the no helmet law have just worn the law makers down.If the parents do not wear a helmet the kids will not either no matter how old they are.Gov.Nixon please do the right thing.You know the risks.Save some lives.