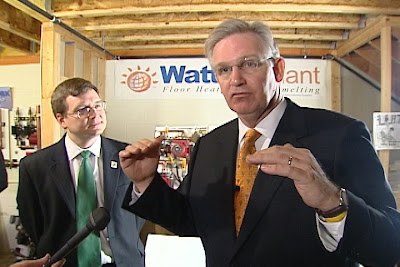 Jay Nixon's approval rating has dropped to the lowest point in his Governorship, falling a total of 19 points since he was inaugurated, according to new SurveyUSA data.

Nixon's November approval rating of 44 percent is just the latest troubling sign for Democrats of all stripes -- who rallied to sweeping victories across the country just a year ago but now find themselves accountable to an electorate wearily waiting for economic progress.

It also marks the first time the poll has showed more Missourians disapproving of Nixon than approving.

The numbers show that independents are the driving factor in Nixon's declining polling position. In October, Nixon won 52 percent of independents. This month, he lost nine points among that voting block. Nixon also shed seven points among self-described moderates, who shifted their previous approval to the undecided column.

There's also a striking loss of liberals within the crosstabs. Just 58 percent of self-described liberals approve of the Governor. Nixon isn't known as a liberal firebrand and October's 71 percent number could be an outlier. But it's notable that his support among Republicans and Democrats stayed stable over the last month, while his overall number took a significant hit.

A look at Nixon's tracking line shows August to be the month where the Democratic Governor's polling support began to erode.

Nixon's support in southwest Missouri has also taken a dive, falling to just 36 percent. That's a 13-point drop in the Ozarks in just one month. Nixon still wins the St. Louis area, but by a smaller margin.

But some dismissed the PPP poll as an outlier because of the high amount of respondents that registered as "undecided."

Still, two polls showing the Governor polling in the low to mid 40's just a year after a smashing electoral route should raise some alarm bells among Nixon aides and supporters.