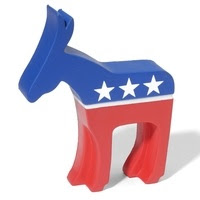 Eight young Missouri Democrats and delegates to the 2008 National Convention are urging the state's Democratic Congressional delegation to support a robust public option in any type of healthcare reform plan.

"Help us show our peers who we registered, dragged to the polls, and convinced to vote for change that when they invest in the Democratic Party, they get the results they were promised," said Adler.

The letter cites a Kaiser Foundation statistic that more than 30% of those between ages 19 and 24 are uninsured -- the highest of any age group.

I sure hope the Missouri Democratic Party takes a look at this, but I'm skeptical. Young people across this nation are flocking to the Democratic Party, but not at the same rate in Missouri.

The Missouri Young Republicans have become a force to reckon' with, even though young voters across the state don't agree with their approach to policy. You can't sell everyone on being a Democrat, but you CAN sell them on the values of the Democratic Party.

The Missouri Democratic Party has been an epic failure in regards to reaching out to young voters -- especially in Southwest Missouri.

They provide little to no resources, education, or training. Calling on local university students to fill in volunteer gaps at the local Jackson Days doesn't cut it.

We must focus on a solid youth outreach operation and speak consistently to the concerns of young people.

The quicker activists, organizers, candidates, staffers, and political committees realize this, the more success they will have with young voters and the healthier our party and democracy will be.

We must build long-term relationships that last more than the span of an election cycle.

It's time for new leadership and fresh ideas at the local Democratic Headquarters.

Stephen said...
This comment has been removed by the author.
10:41 AM

I agree with you wholeheartedly. I'd like to hear some more of your thoughts if you feel so inclined. My email is stephen.e.eisele@gmail.com