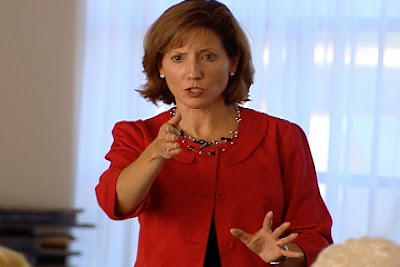 UPDATED: STOUFFER CAMPAIGN RESPONDS
"The goal here is better government . . . not attacking others"
Republican candidate for Congress Vicky Hartzler is seizing on the touchy topic of taxes in an attempt to illustrate a difference with her 4th District GOP primary opponent Sen. Bill Stouffer.
In a release Tuesday, Hartlzer picked up a Democratic attack on Stouffer and pledged to not vote for a tax if sent to Washington.
"When Bill Stouffer was elected to the State Senate, he proposed a bill to raise the state sales tax by 1 percent for 10 years. I think raising taxes is the wrong way to solve problems," Hartzler said in a statement.
The former State House representative is referring to a 2007 bill that would have raised the sales tax by 1-cent over a decade to pay for $7.2 billion dollars in interstate highway upgrades. On the day Stouffer announced his candidacy, the Missouri Democratic Party blasted out the charge to reporters and called the Napton Senator a hypocrite.
As Chair of the Senate Transportation Committee, Stouffer was the main backer of the tax for roads plan.
"My answer is, ‘Don't raise any taxes. High-tax thinking is the problem, not the solution. I know the people of Fourth District strongly agree, in a broad and bipartisan way," Hartzler said.
"I never voted for a tax increase while I was in Jefferson City. I won't vote for one in Washington, D.C. Unlike my opponents, I believe Americans need lower taxes, not higher taxes," she added.
On the second day of his announcement tour in Jefferson City last week, Stouffer defended his position, saying that voters would have ultimately decided whether to implement the tax increase. "I don't shy away from tough decisions," Stouffer said, in an interview published by Capitol Calling.
UPDATED 8:09 P.M. The Stouffer campaign said it was disappointed Hartzler had taken a "negative tone." "There are so many folks interested in running for this position now because the district isn't happy with Ike Skelton voting with Nancy Pelosi 95% of the time. We are disappointed one of these candidates has chosen to start this important race with a negative tone. The goal here is better government, not attack others for presenting solutions to a vote of the people to solve the problems we face in Rural Missouri," said Stouffer spokesman Scott Paradise.
This marks Hartzler's first direct criticism of Stouffer. Republicans privately worry that a contentious and costly GOP primary campaign would eviscerate any shot at upending Democratic Congressman Ike Skelton.
Hartzler's release also points out that she was the first candidate in the race Rep. Skelton. She takes a shot at Skelton for voting for the House climate change legislation, which she refers to as a "carbon tax," and attempts to paint both men with the same charge.
"With great personal respect, I strongly disagree with both gentlemen. Taxes are too high, not too low," Hartzler said.
"Principled disagreements will occur, as on this issue. When important differences do occur with Senator Stouffer or Congressman Skelton, I will state my position clearly and will strive to deal with vital issues in a way that is respectful at all times," she added.
Posted by David Catanese at 4:15 PM

Wait..is this the same Vicky Hartzler that just adopted another young child?? Why don't you properly raise that kid instead of auditioning for a promotion that will keep you half a country away from home almost all year??

Well using that logic, I take it you didn't support Palin either.

How come when a man's job takes him away from home part of the time and the woman has to 'hold down the fort', it is O.K. but when the roles are reversed we criticize?! Get real and leave gender out of this!

Why is stating what a person's voting record considered "negative campaigning"? Maybe he now understands that the American people are tired of being taxed and he didn't want that information to get out.

Wow, what a sexist! So you only think women can raise a "kid"? As best I know, The Hartzler family has ONE child, who is probably around 10? 11? So looks like you are a bit behind the times Archie Bunker. But I guess when you don't have anything to combat good ideas, you resort to attacking the person with the good ideas. Sad.