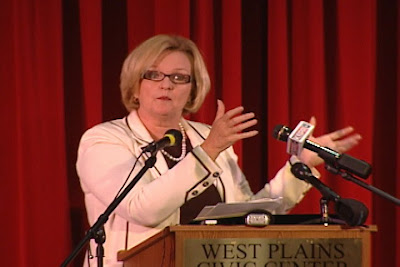 WEST PLAINS, Mo. -- Sen. Claire McCaskill qualified her support of adding a public option to the country's healthcare system Monday, by adding a caveat that any government plan must make sure private companies can compete.

"If it's constrained, I'd vote yes," McCaskill said, when asked directly about a public option at a jam-packed townhall in West Plains Monday morning.

More than 450 people packed into the West Plains Civic Center to ask questions of Mccaskill, and at times jeer the junior Senator's answers.

At the beginning of the forum, McCaskill had to repeatedly ask one man in the fifth row to stop interrupting, but for the most part, the crowd was courteous.

McCaskill received many of the questions she's been asked at other forums.

"Doing nothing is a bad idea," McCaskill said when an attendee asked about the impact of reform on private insurance.

When McCaskill said that U.S. law prevented the legislation from allowing any money to pay for abortions, an older woman leapt to her feet to disagree, shouting, "it's in there!"

McCaskill also agreed to champion an amendment that would require Congress to take part of any plan they pass for the general public.

"I believe that will happen," she said. "80 percent of this bill, most of Congress agrees on... and most of you probably agree on," she added.

The biggest reaction from the crowd during the hour-long townhall came when McCaskill's dismissed concerns about a complete government takeover of healthcare.

"No one in Washington wants us to have a socialist country," McCaskill said to a large round of boos.

"It's not the silver bullet some news outlets want you to think it is," McCaskill said, referring to lawsuit reform.

She pointed out that while the cost of medical malpractice lawsuits have decreased in Missouri over recent years, the cost of healthcare continues to rise.

Afterwards, Temple said she respected McCaskill for coming, but did not think she changed anyone's mind.

While a clear majority of the crowd was clearly against a government option, there was a small, but vocal group who showed up to support McCaskill's efforts.

One man stood up to say that insurance companies have the most to gain by not including a public option.

Another person asked why liberal ideas are derided when they're responsible for some of the biggest aspects of progress in American history.

But Temple said President Lyndon Johnson's dream of the "Great Society" has failed and that's why she's against any government intervention.

"Social Security's bankrupt, Medicare's bankrupt. We have more poverty...The Great Society didn't work," Temple said. "So I want them to show me hard data to prove why this will work," she added.

McCaskill will hold a similar townhall at 12:30 p.m. at the Gillioz Theatre in downtown Springfield.

Get MORE from my KY3 News @ Noon REPORT HERE.

Sent via BlackBerry by AT&T

I didn't read the article because I am listening to McCaskill, so maybe the answer is there...I'll read your entry later...Question:

I can hear McCaskill on 3.3 but I cannot hear THE PEOPLE. Why can I only hear her answers and not the questions and comments of THE PEOPLE???