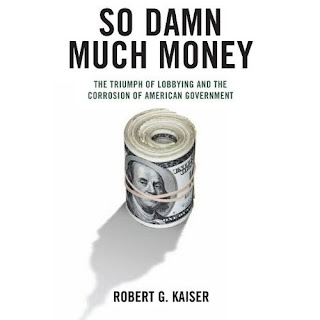 "Most of what people deride in politics is because people don't understand it."

There may be no single person who's been more important to Roy Blunt's political rise than Gregg Hartley.

In his new instructive book, So Damn Much Money, about the rise of money and lobbying in Washington, Robert Kaiser describes Hartley as Blunt's most important personal aide and friend for around three decades.

The two have been close since the 1970s, when Blunt served as Greene County Clerk.

Hartley is one of the featured players in Kaiser's book in order to provide an example of the continuous and to some, troubling, revolving door between Capitol Hill and K Street.

Kaiser depicts Hartley as a conservative, friendly, unpretentious but outgoing Republican who followed Blunt to Washington and eventually ran his whip organization. It was April 2003 when Hartley decided it was time to "go downtown -- to become a lobbyist."

Hartley's story is not only important to understanding the way Washington works, but likely gives readers a window into Blunt's thinking, at the very time Republicans are contemplating his candidacy for U.S. Senate.

Below are excerpts of Kaiser's reporting on Hartley and his relationship with Blunt, beginning with Hartley's decision to go work for one of the top lobbying groups in Washington, Cassidy & Associates. Italics represent text and direct quotes from So Damn Much Money. (And if you're interested in the rise of money in politics and how the earmark originated, the entire book is well worth the read.)

"Blunt and I both concluded that I could still be a valuable part of his team, and there was no reason for us not to continue our personal relationship and our political relationship," Hartley is quoted. "I was fortunate in the sense that, being fifty years old instead of thirty-five, having spent seven years on the Hill . . . virtually all of it on leadership staff, having worked for a guy who had build a pretty good reputation in this town and moved up rather quickly, gave me lots of opportunities that the average staffer leaving the Hill doesn't have," Hartley went on.

Because he was a Republican with ties to the leadership entering a predominately Democratic firm, Hartley's skills were considered a top commodity for the legendary lobbyist Gerry Cassidy. Hartley was able to bring in scores of new climates, and reorganized the firm from top to bottom. He was at the top of hit game. Life was good.

Hartley liked his new life. "I enjoy 80 percent of the work" and the hours were delightful. "When I worked for Roy I worked 70 hours a week," he said, but at Cassidy it was 9 a.m. to 6 p.m . . . And he stayed close to Roy Blunt, raising money for him, donating $47,000 himself (with his wife) to Blunt, his leadership PAC and the House Republican campaign committee."

Hartley also enjoyed the era of the permanent campaign.

"I didn't grow up wanting to run government, I came from the political side of the equation. I like campaigns, I like politics. I only worked in government because that's what paid your way to do the political side." Hartley grew up as a Democrat, started his professional life as an administrator of legal aid programs in southwestern Missouri and fell in love with politics. "I quickly learned there wasn't much potential in Democratic politics in southwestern Missouri," he said, so he became a Republican. That decision was "as much practical as philosophical. It's hard to be impactful when you're in a minority - I learned that lesson early."

Hartley made no secret his love of fundraising. "I think it's an important part of the political process. I think a measure of a good campaign and how successful it's going to be is its ability to raise money." What about reformers who complain the system is corrupt . . .? What about Fred Wertheimer, the former president of Common Cause and founder of a group called Democracy 21, an advocate of reform who had criticized DeLay's tactics for years? "Fred is full of shit," Hartley replied, softening the message with his friendly grin. Raising money was part of the game, part of the helter-skelter of it . . . the rough-and-tumble of it . . . The American public is intrigued by politics and campaigning and the routes to power," he said. "They want to know about it, and on the other hand they go, 'Ohmigod, isn't this distasteful . . . I think politics works. I think most of what people deride in politics is because people don't understand it."

"Hartley is not troubled by the relationship between lobbyists and members of Congress, and he won't accept the formulation that the Hill now depends on downtown, and downtown depends on the Hill. Instead he sees more complicated interactions: "A lot of people on the Hill are a new breed . . . they understand there's lots of things you do that interrelate with government." In other words, you can help people who need something from the government, and you can accept their help in return, and that's fine."

"Most people in the lobbying business contribute [money] so that they're seen as active participants in the process. And if you're seen as an active participant, does that sort of move you into a different realm than people who aren't? Yeah . . . I would presume that lobbyists who participate heavily in the political process are probably more successful by and large" But giving money "is not compulsory," he emphasizes. "I can't possibly give money to everybody I know on the Hill. It's impossible. But people I don't give money to still see me and talk to me and work with me on my clients."

To open his book, Kaiser outlines the relationship cultivated between Cassidy's firm and disgraced lobbyist Jack Abramoff. He includes a telling quote from Hartley "not over-worrying" the deal he had help strike with Abramoff.

Posted by David Catanese at 1:31 PM

Shocked, shocked to find out that there is fundraising going on by politicians... as if Republicans should not network and fundraise. It didn't work for Sen. McCain who was trounced in fundraising by Senator Obama after Obama's overt bait and switch. Recently, there was critical reporting that Robin Carnahan out-raised Cong. Blunt but apparently, her big money is clean. And, of course, nothing wrong with all the Steelman trial lawyer money, personal and from friends. A pattern is emerging that should be flattering to Cong. Blunt, opponents who apparently can't find sufficient fault with Cong. Blunt are attacking everyone but him, his family, his staff, others in Washington.