Blunt: We Should've Had More Fights 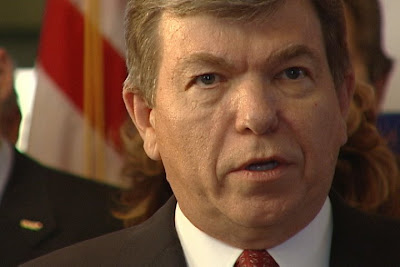 U.S. Senate candidate Roy Blunt tells Right Wing News he should have lead more fights on issues while he was GOP Whip, rather than trying to keep moderate members on board.
"We probably were more focused on being sure that we kept our moderate Republicans in the buggy than we were on just having the fight," Blunt said in an interview with Right Wing News' John Hawkins. "And we'd have been better off to have a few more of those fights."
***
ALSO OPENS UP ON $PENDING:
Congressman Blunt also acknowledged that "we always spent more money than I wanted to spend." But went on: "You know, every year the House passes a budget. We always allowed our most conservative members one of the alternative budgets and I always voted for it."

"Sometimes there were 75 or 80 of us, I think one time we got as high as 111. But that's a long way from 218. And so I was always frustrated with our levels of spending. But if you want to know if we could have spent more money if we'd have given in to the current majority who was in the minority at the time, here's the $800 billion we could have spent," Blunt said.

ON 2010:
"I think by Election Day 2010 Missouri Independents and a considerable number of Missouri Democrats are going to respond in a positive ways to my candidacy, as well, because of what it stands for. It stands for the last chance to stop Nancy Pelosi, Harry Reid, and Barack Obama from doing whatever they want to do," Blunt said.

Posted by David Catanese at 3:23 PM

It sounds like Blount is trying to wax over the past 8 years, trying to put a different spin on it.

"We should have had more fights"? He was one of the whips fer cryin' out loud. His job was to keep his party members in line. Now he's complaining that he did his job too well?

Sounds to me like he is trying to distance himself from the Washington crowd----but he is a charter member.

The only Republican who has a chance of beating Carhahan is not even invited to the table.