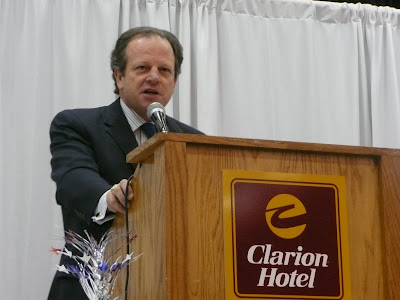 As contradictory media reports swirl, the longtime Greene County Commissioner tells the KY3 Political Notebook he has applied to become the next Director of Missouri's Department of Natural Resources.

"Coonrod's definitely at least being considered for the job," says one local Democrat.

ALSO: Another Democratic source close to Nixon's transition team says one out-of-state DNR candidate has already turned down the job.

AND: Where will Jeff Harris, Margaret Donnelly and Judy Baker land?

***NEXT WEEK COULD BE FILLED WITH APPOINTMENTS***

***
Greene County Presiding Commissioner Dave Coonrod told the KY3 Political Notebook Saturday that he has applied for the job to head Governor-elect Jay Nixon's Department of Natural Resources, and was encouraged to do so by Nixon's transition team.

Coonrod's comments come after he told the Springfield News-Leader that a report by KSPR-TV about a possibility of a potential appointment was "not true." KSPR News first reported that Coonrod was being considered for the post on New Year's Eve. Coonrod later told the News-Leader's Chad Livengood the story was "based on the rumor mill."

But in an interview Saturday, Coonrod attempted to clarify the confusion.

"I said I was never contacted by the Governor-elect directly, which I haven't been, but the question I wasn't asked . . . was whether I was contacted by the transition team, which I really, I frankly didn't want to volunteer," Coonrod said. But Coonrod acknowledged that he, in fact, has had conversations with Nixon transition staffers, and for the first time, seemed to outline his credentials for the top environmental position.

"I've always really liked (current DNR director) Doyle Childers, but DNR has got some real challenges. I've got a background in the environment and geology. Seems like a pretty good fit, but that's for Governor-elect Jay Nixon to decide," Coonrod said. "It's difficult. I hoped I'd get word by inauguration. I'm kind of in the dark. This is not for me to announce."

Livengood's piece clearly states that Coonrod said he had not been approached by any members of Nixon's transition piece. KSPR's original six-line story does not include a comment from Coonrod, except to say "he's also heard the rumors." Coonrod again repeated on Saturday that he was "surprised KSPR would run a lead story," on something that had not been confirmed.

Still, several Democrats contacted by the Notebook for this story said they were surprised by Coonrod's public comments. "That was a weird way of handling that," said one. "I don't think he likes the media, and sometimes he's antagonistic," observed another.

Nixon's team has had a policy of not commenting on potential cabinet selections, but some Democrats are raising questions about why the picks are taking so long.

Longtime Democratic activist and Nixon transition adviser Joe Carmichael said he anticipated that Nixon will have made all of his selections by inauguration day, but couldn't say if those announcements would be made public by that time. "It doesn't mean everybody picked by Jay is going to get through the vetting process," Carmichael said.

Carmichael said the possibility of a southwest Missourian receiving a cabinet post is "certainly possible," but declined to comment on potential candidates.

One Democratic source, who agreed to speak freely in exchange for anonymity so not to offend Nixon or Coonrod, said Nixon's team had already approached an out-of-state candidate for the top slot at DNR, but that the candidate had not accepted the offer. "This is more the reason why Coonrod's definitely at least being considered for the job," the Springfield Democrat said.

The source also added that a Springfield Democrat close to Nixon is in the process of making calls to potential replacement candidates for Coonrod at the Greene County Commission. Under state law, if Coonrod was selected, Nixon would appoint his replacement.

Schoolcraft has also been mentioned as being looked at for a post in Nixon's administration, but in an interview he wouldn't comment on the transition process. "I'm happy being the Mayor of Willard, and we're hopeful that we'll see more appointments soon," Schoolcraft said. The Willard mayor and former legislative candidate also stayed mum when asked if he's been approached about the Greene County Commissioner position.

For local Democrats, the politics of this potential appointment presents a conundrum.

Lose Dave Coonrod to Jefferson City, and you may kiss goodbye a Democrat on the County Commission by 2010. That's when whoever is appointed would have to stand for election.

"I hate to say this, but I don't know a Democrat who can win countywide right now," said another Democratic staffer, who has done campaign work for several area candidates. "We don't really have anybody."

In 2006, Coonrod held off former Republican State Representative Brad Roark by just 4,045 votes. He acknowledged he's "not even safe" running for re-election in Greene County. If he ran for re-election in 2010, it would be his eighth campaign.

"It's tough for me to even hold it. Nothing's easy about being a Democrat in southwest Missouri. I see my Republican friends get a free pass in an election, and I say 'boy, that'd be nice,'" Coonrod said. "I really hope whoever gets it has the ability to serve the citizens of Greene County," he added.

Coonrod is a liar. He said in the 1/3/08 News Leader "The governor-elect has not been in contact with me,"
Here he says he was been. What gives? He is splitting hairs like Clinton did during his impeachment. Just admit it Coonrod. You were caught in a lie and now your true face is surfacing once again. You are an untrustworthy liar!

I always believed that the one doing the appointing makes the announcement.